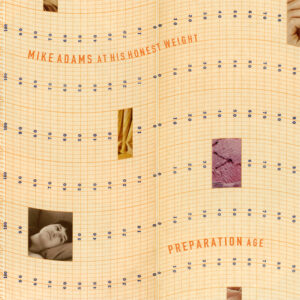 Mike Adams At His Honest Weight rounds out 2015 with Preparation Age, a new 5-song one-sided LP on Burnt Toast Vinyl in conjunction with our friends at Sounds Familyre. It was recorded during the same sessions as a forthcoming 2016 full-length and serve as companion songs and a taste of what is to come. They build on the solidly crafted pop songs of 2014’s The Best of Boiler Room Classics through sonic experimentation and take the band’s sound into a hazier new territory combining influences from the synth-based rock of Wheat, Grandaddy, and Flaming Lips with Beach Boys inspired vocal harmonies. Throughout Preparation Age, Mike Adams manages to tell stories of forgotten friends and everyday people, turning fear and anxiety from the departed past into something pleasing and beautiful. In the more perfect universe next door, 2016 is the year for Mike and the boys’ magnum opus crowning achievement that will earn them a well-deserved gold record. For 2015, in the here and now gold teeth, it’s Mike Adams At His Honest Weight’s Preparation Age.

Preparation Age is presented in a limited vinyl-only release of 500 copies with the B-side featuring an etching and including a digital download code.

This LP will be out in stores on 4 December, but the band will have a limited number of copies to sell on their forthcoming West Coast Tour with Sound of Ceres (members of Candy Claws, The Drums, and Apples In Stereo). We’ll have copies available for mail order soon.